With a talent like no other, it’s no wonder Doug Gabriel has one of Branson’s longest running shows! The incredible talent and vocal abilities combined with that of his family make this a must see show. Doug Gabriel and his family perform a little bit of country and little bit of rock and roll and everything in between. With a wide variety of music, the #1 Hits Tribute Show is a show for all ages to enjoy.

Doug Gabriel’s first show ““The Branson Morning Show, starring Doug Gabriel” debuted in 1994 and he has been belting out tunes and picking his guitar for audiences ever since.

He has opened for names such as:

Along with his jaw dropping vocals, the man knows his way around a guitar! The highly awarded performer even invented his own instrument and called it the “Muftar”. The unique piece is crafted from a 1969 Ford Thunderbird and is often featured in the popular Branson attraction, Ripley’s Believe it or Not.

Don’t miss a chance to see Doug Gabriel at the Branson Famous Theater with matinee and evening shows! 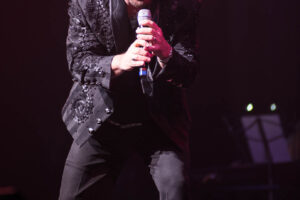